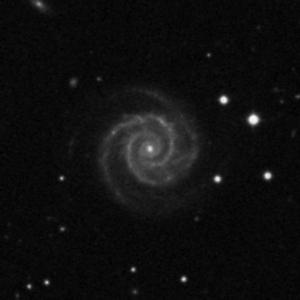 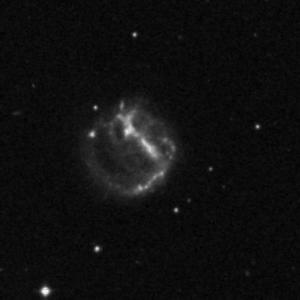 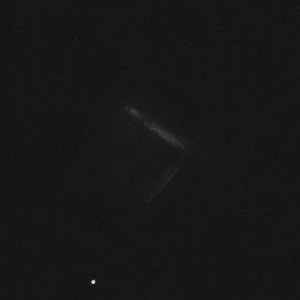 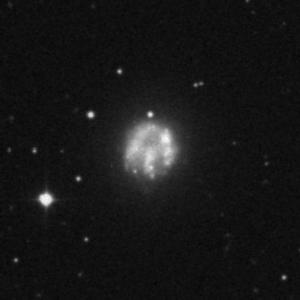 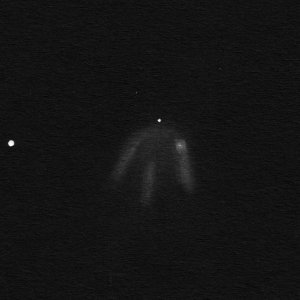 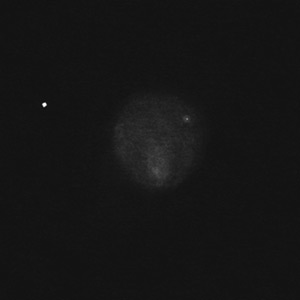 Martin Schoenball, 10", 179x, fst 6m7:
Pretty bright, round galaxy. Very little brighter middle and diffus rim. The middle claw is visible in S with its brightest spot close to the edge. A very small knot with a stellar peak is visible in the NW. The eastern claw appears extremely faint and only a trace of it is visible. Pretty high surface brightness. 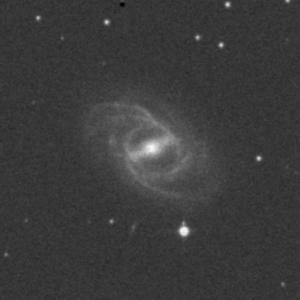 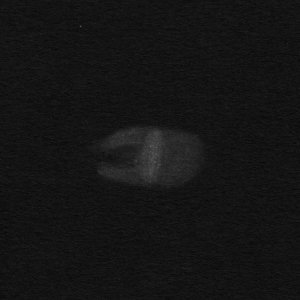 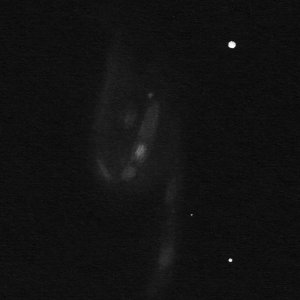 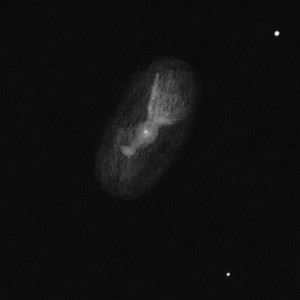 Martin Schoenball, 10",139x, fst 6m3:
Bright galaxy, bright core, it is brightest northwest of the center. In all it has a oval shape at low magnification. At higher magnifi. the part in the norhwest is dominating. The center extends faintly towards southeast und leads to a faint but large knot. Elongation about 3:1 SE-NW.

Matthias Juchert, 12,5", fst 7m0:
Long, very bright central area with 2 obvious spiral arms not winding around the core but extending nearly parallel due north and south. Visually not as asymmetric as on photos. 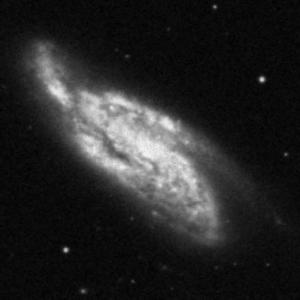 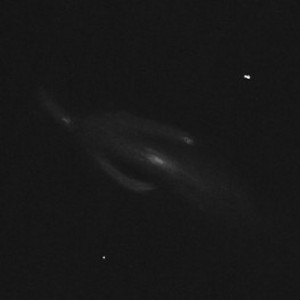 Matthias Juchert, 8", fst 5m8:
The galaxy is easy to find north of the prominent "Y". It is obvious, pretty bright, not quite edge on. The overall shape is long-oval and pretty homogenuous. 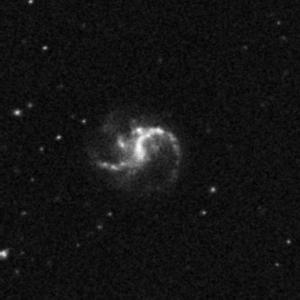 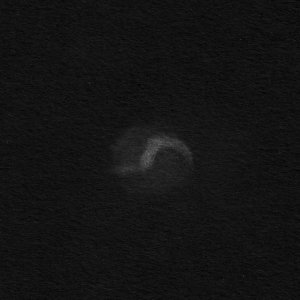 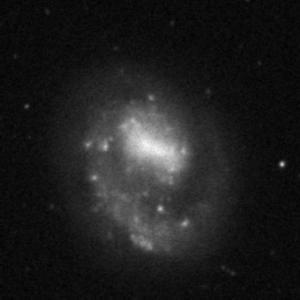 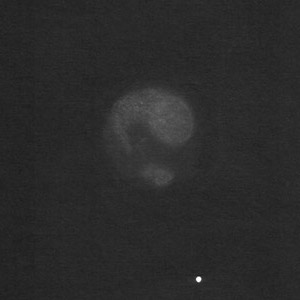 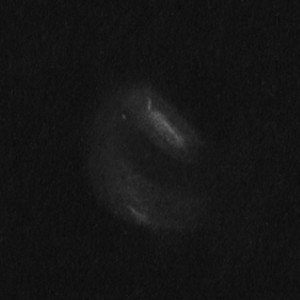 Uwe Glahn, 16", 225x, fst 6m7:
dominating 1:3 NE-SW elongated nucleus with mottled structure; its NE-end has some structure to the N; a 2,5' long arm starts on the N-end of the nucleus; the arm is brighter and thicker to its S-end; brightest HII Region IC 3668 is easy to see; a very faint and stellar region is found 45" E of the nucleus

Matthias Juchert, 10" fst 6m4:
A bright and large galaxy with very special details. In a round-oval halo lies an eccentric, bright core. A spiral arm extends from here in direction of a bright star. The arm has different brightnesses. Brilliant! 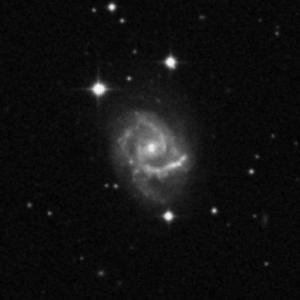 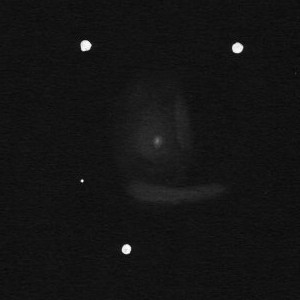 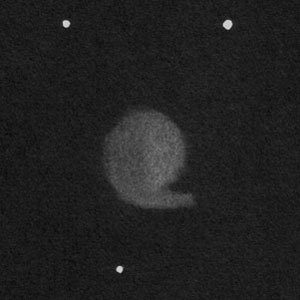 Martin Schoenball, 10", 197x, fst 7m0:
Bright galaxy, a small extension toward west is visible in the south. The galaxy is barely brighter in the middle. The whole western half appears slightly brighter. Little elongated N-S. 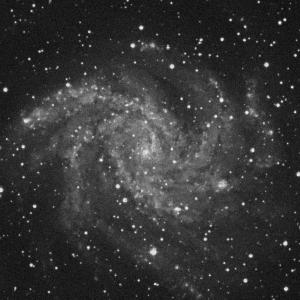 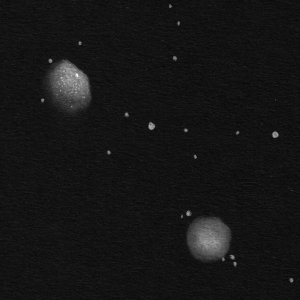 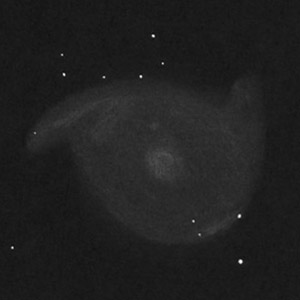 Martin Schoenball, 10", fst 6m3:
Bright galaxy, very large, but low surface brightness. No brightening to the center but shows a broad little brighter core. The galaxy is spiraling with one arm on both sides of the large galaxy body attached, swirling counter-clockwise. There is a brighter area the beginning of the eastern arm, as well as at the inner side of this arm. North of the center is a very faint knot. All in all very low contrasts and many stars embedded.

Matthias Juchert, 2", fst 6m5:
The spiral galaxy is visible even in 7x50 binoculars as a very faint nebula. It is much fainter than the neighboring star cluster NGC 6939.

Matthias Juchert, 12,5", fst 6m5:
Very nice view at low power with NGC 6939. Even at 47,5x some details are visible. The center is not very pronounced. The western spiral arm is visible best with a counter-clockwise winding. One can note the width of the arm but can not split it. The northern arm is only very faint and oddly seems to wind clockwise after a straight part. 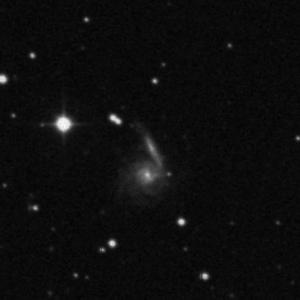 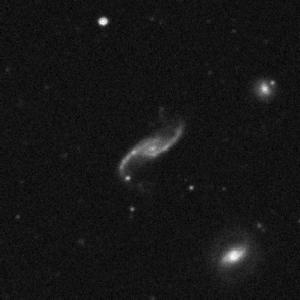